After an Argument: The Value of Patience 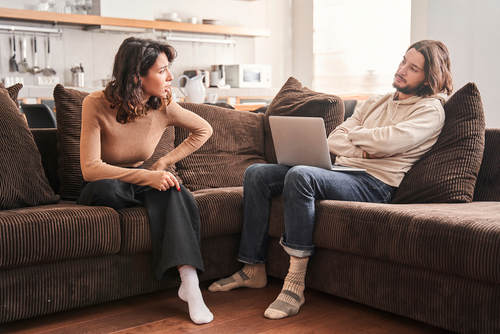 You’ve behaved poorly in an argument, been called out for it, and your partner is angry. How do you handle it? Maturely and securely with patience, or spitefully and vindictively? Here are some possible responses:

Response #2 is the most common after being called out for an off-putting, controlling or otherwise inappropriate behavior. Why? Because it is hard to be told we’ve done something wrong, even though if we hadn’t been told, we might have kept doing it and ultimately damaged the relationship.

Clearly, response #1 is the best course of action if you know your behavior was in error. Why? Because trust is built when people are secure enough to hear what they could have done better, try to improve and allow the other person to express a full range of feelings, as long as when they tell you, they aren’t abusive, mean-spirited or spiteful. Generally, people will forgive if they feel heard and understood and believe the other person has their best interest at heart.

However, it doesn’t mean they’ll forgive at the same time you admit the error. Anger is a feeling that has a chemical component to it. While people could immediately say they forgive, their body’s chemistry may need an hour or a few hours to reset. This is where it gets tricky. People who are used to being in control or in positions of power may not have much experience with patience, that requires an ability to wait, while the OTHER person decides what will happen next. Patience is a learned skill. Not knowing what will happen (until the other person responds) takes courage.

The lack of patience and courage to allow another person the time to forgive and move forward is why some people opt for response #3. They feel embarrassed for behaving poorly, a very tough emotion to experience, helpless and possibly, inexperienced at not having the power in a relationship. They make a grab at power in any number of ways: quitting the relationship, claiming they don’t care that much, pulling the plug on an upcoming activity or disappearing so that the person who is angry will now worry.

It’s probably pretty clear to you why #3 would destroy trust in a relationship. If someone expresses their anger or disappointment in the other’s behavior and instead of hearing and attempting to improve, the listener gets ahead of the speaker with an action more hurtful in return, there is little reason to ever discuss problems. It would be more of a problem to mention an issue if you knew you were (figuratively) going to take a punch in the gut afterward.

Steve, mid 40s, is a successful businessman with a prominent public profile. He has entered a relationship with Beverly, also in her 40s, who’s experienced career success in her field too. Meeting in January, they’ve now been seeing each other for three months. Steve used to live in a small town in upper New England, where he has many longtime friends. He has made plans to take Beverly there and show her the village so that they have a getaway, and he can introduce her to people close to him.

The backstory: Earlier in their relationship, Beverly asked Steve to include her in his online presence. He explained that given his public profile, he has not historically included any links regarding his romantic life. Beverly has used that same media to send him messages about how many people he is linked to and later to let him know she knows he has added more connections and still not her. She has messaged him “What’s up” [with that]?

The fourth time she includes an inuendo about the same subject, he returns the message to let her know he is angry that she seems not to have respected or perhaps heard what he explained to her about his online presence. When she replies that she understands because she has read up on the pitfalls of social media in regard to romance, he says he’ll “certainly forgive her tomorrow” but it being late, he’d like not to think about it anymore that evening.

The next morning, Steve wakes up and checks his phone before heading off to work. The first message he receives is one from Beverly saying she is opting out of going with him to the village to meet his friends in the next two days because she is grieving the loss of her mother, whose first anniversary of death is that same week. She also says, “Maybe another time. I am off for a girlfriends lunch now.”

In this sample situation, there was a concern and when voiced, it became extremely uncomfortable for the listener (Beverly). While Beverly admits she understood Steve’s reasons for not including her in his online presence, she pulls the plug on an event that was  important in their relationship, inclusion and introduction to Steve’s much-trusted friends in a setting that could have allowed for growth in their relationship.

The Impact on the Relationship

While Beverly did have reason to grieve the loss of her mother, there was little in her message to imply she cared about the loss to the relationship or the loss to Steve of her not going. The response and its timing would imply retaliation and cause serious damage to their relationship and to the trust that future exchanges of emotions (other than positive) were safe to voice.

Beverly felt embarrassed about “zinging” Steve with negative messages about not being connected online. Steve ignored her comments until he saw that they continued. When Steve voiced his anger, Beverly had trouble waiting for Steve’s response of forgiveness the next day, though he’d said it was coming, and took matters into her own hands. She lacked the courage to endure with patience while waiting on the response from Steve.

Who would get hurt most by the way this situation played out?

It’s hard to say. Steve might have been emotionally hurt to have had Beverly change plans with little remorse, disappointed not to be able to enjoy intimate time together and embarrassed to tell friends she was no longer coming. Beverly might be hurt if Steve withdraws from the relationship because he lacks trust in Beverly’s emotional ability and security. She would have felt very powerful when she hit the “send” button that she had taken control of the situation. However, afterward, if Steve really mattered to her, she might experience extreme loss when the relationship disintegrated.

Food for thought: Patience to wait and let people’s emotions reset takes courage. It can pay off not to do what we “feel like” doing. Doing what we feel like doing may feel powerful in the moment but rarely serves our long-term goals. Using your brain rather than your feelings to determine your behaviors pays off – big time. Next time, instead of immediately honoring feelings, like the need to take control of a situation, consider the short-term consequences and especially the long-term effects.